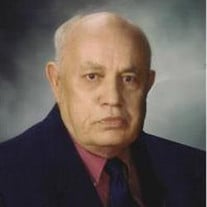 Thomas Padgett, Jr.: Thomas passed away early Tuesday morning, August 2, 2004 at Mahaska Hospital at the age of 78 years, 1 month and 30 days. Tom's memory is honored by his four children: Barb and her husband, Randy Couper of Monroe, IA; Rex Padgett; Ron and his wife, Jan Padgett; and Jack and his wife, Barb Padgett; all of Oskaloosa. He was blessed with 10 grandchildren: Todd & Jack Mich, Kim Herbolt, Morgan & Natalie Padgett, Chad and his wife, Deb Padgett, Matt and his wife, Cara Padgett and Jon, Cory & Betsy Lee and 5 great grandchildren. He is survived by two sisters: Franny Moore of Oskaloosa and Joyce and her husband, Bill Harris of What Cheer, IA; and three brothers and their wives: Donald & Jean Padgett of Des Moines, Jerry & Rosalie Padgett of La Crosse, WI; and Dave & Janet Padgett of Boone, IA Thomas Padgett, son of Thomas and Minnie Smith Padgett was born June 3, 1926 in Oskaloosa, IA. Tom joined the U.S. Army on July 11, 1944 at Jefferson Barracks, MO. He served as a truck driver in the Burma China Offensive in Central Burma and India. At his discharge on June 4, 1946 he was a Technician 5th Grade with the 475th Infantry Regiment. After returning to Oskaloosa he began working for Whitlatch Dairy; shortly thereafter, he began his construction career, which he did for most of his life. He also worked for Mich Coal Company, and he and his wife operated the Oskaloosa Care Center for numerous years. Tom married Bernadine Clementine Fry on January 25, 1949 in Ottumwa, IA. In 2001 he received an Honorary G.E.D. from Oskaloosa High School. He was a member of the American Legion and the V.F.W.; he enjoyed fishing, hunting, cribbage and coaching Little League Baseball. He was preceded in death by his parents;his wife Bernadine on March 12, 2004; a son in infancy, Tom Padgett; a son-in-law, Dale Mich; and a grandson, Zachary Padgett. PDF Printable Version

The family of Thomas Padgett created this Life Tributes page to make it easy to share your memories.

Send flowers to the Padgett family.