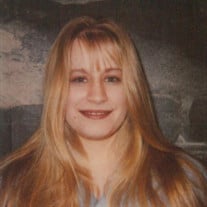 Tikens Binns, 41, of Ottumwa, passed away Wednesday evening, June 30, 2021, at MercyOne Medical Center in Des Moines, Iowa. Tikens Kurtrisha Michelle Binns, daughter of Jay C. and Virginia (Stinson) Kerr, was born May 23, 1980, in Davenport, IA. Growing up, Tikens attended Knoxville and Oskaloosa High Schools. When she was 17, she met Jeff Binns, and the two were inseparable. Tikens and Jeff married May 6, 2006, and two children were born to this union, Chris and Mercades. Tikens worked in the foodservice industry for multiple restaurants before her retirement in 2016, when she became a full-time homemaker. Tikens was a huge race fan and loved attending the races in Oskaloosa, where she watched her brother compete weekly. Tikens had a spirit that was always overjoyed. She constantly was smiling and always wanted the mood to be light and happy. She was also an avid music lover, but Tikens true love was her family. Her family includes her husband Jeff Binns of Ottumwa, her two children; Chris Wichhart (McKenzie Ogden) and Mercades Sparks, her mother, Virginia Sherwood of Beacon, her two sisters; Chanel (Ron) Kauffman of Beacon, IA, and Tiffiany (Mike) Dorothy of Oskaloosa, IA, her four brothers; Trenton (Ashley) Kerr of Oskaloosa, IA, Shon (Shannon) Sherwood of Oskaloosa, IA, Travis (Karie) Sherwood of Ottumwa, IA, and Shannon (Jennifer) Sherwood of Oskaloosa, IA, and many nieces and nephews. Tikens was preceded in death by her father, Jay C. Kerr; her stepfather, Dave Brackelsberg; her grandmother, Pauline Stinson and an uncle, Curtis Stinson. As was her wish, Tikens’ body has been cremated, and a private family memorial service will be held at a later date. Memorial contributions can be made in Tikens name. Langkamp Funeral Chapel & Crematory has been entrusted with Tikens final arrangements.

The family of Tikens Binns created this Life Tributes page to make it easy to share your memories.

Send flowers to the Binns family.