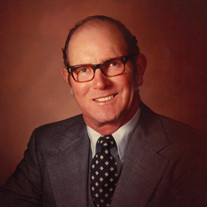 Tunis Kelderman, 93, of Oskaloosa, passed away Wednesday, January 12, 2022, at the Crystal Heights Care Center in Oskaloosa, IA. Tunis Elmer Kelderman, son of John and Susie (Menninga) Kelderman, was born February 23, 1928, in the home of his parents, which was North of Pella. He graduated from Centennial Country School near Leighton, Iowa. From an early age, Tunis worked on the family farm acquiring the skills necessary to manage a farm and raise livestock. Eventually, he began working at the Carroll Brown hog farm. Tunis was united in marriage to Joann Fynaardt on December 12, 1951, at the home of the bride’s parents. The couple moved to the Sedrel farm southwest of Oskaloosa in February of 1952. He also served seven years in the Iowa National Guard. Tunie worked hard to develop his farming operation and added the Nieuwendorp farm in 1963. He enjoyed visiting with other farmers at Brummel Brothers Feed store in Leighton, a “regular” for decades. Tunie was passionate about his crops and hog operation and was active in the Iowa Corn Growers Association. The friendships gained and the trips he and Joann took in conjunction with that organization offered them years of enjoyment. In 1994, Tunie won the “Highest Yield” award for his soybean crop. He farmed for a total of 48 years. Tunie enjoyed working on his antique tractors during his retirement and was incredibly proud of his John Deere 4020s. He liked shopping for additions to his collection and always loved the “good deal.” As a Red Rock Thrashers Club member, he participated in tractor rides and showed them with other local collectors. He also enjoyed his restored 1957 Chevy, which he drove in many Pella Tulip Festival parades, other local parades, and exhibited in car shows. He was a member of the Dutch Masters Car Club, and he and Joann enjoyed the socials that the group offered. He drove the ’57 in his last parade in July 2015 for Leighton’s 150th birthday celebration but rode as a passenger in 2017. Tunie made his profession of faith in his Lord Jesus Christ at the First Christian Reformed Church in Oskaloosa at the age of 17. Thus began a lifetime of service to his church community. He was a long-time member of the Bethel Christian Reformed Church, where he served on the council as both elder and deacon, taught catechism, and served on numerous building and pastoral search committees. He also served several terms on the Oskaloosa Christian School and the Good News Chapel boards. In the last weeks of his life, he professed his faith to family and friends many times, saying that he was ready to meet his Lord and Savior with confidence. Just last month, he and Joann quietly celebrated 70 years of marriage. In his final months, he assured his family he was ready to meet Jesus and that “it wouldn’t be long.” Tunie’s dry sense of humor, his love for the land, his reminiscing about all things agricultural, and his devotion to his wife, Joann, are a few of the many things his family and friends will remember about him. His wife Joann and their five children and families are left to cherish his memory: Dianne (Dave) De Wit of Rock Valley, IA. Their children Lindsay (Jon) Buchert and children Anna, Emmett, and Otto of Gilbert, AZ; Amanda (Blair) Toews and daughter Judy of Chandler, AZ; Matt (Krista) De Wit and children Weslee, Ruby, Benson, and Calvin of Yankton, SD. Connie Hoogeveen of Van Meter, Iowa, and her children Anne (Dan) Jasper of Pine Lake, MN, and their children Ellie (Levi), Kara, Darin, Natalie, Karina, Titus; Laurie (Sean) Covington of Van Meter, IA, and their children Shannon, Jack, Gail, and Josiah, John (Erika) Hoogeveen of St. Paul, MN, and their children Ezra, Lydia, Samuel, Ruth and Delphinium; Lois (Tom) Scott of St. Louis Park, MN, and their son Dylan of New York, NY; James (Leisha) Kelderman of Sarasota, FL, and their sons, Justin (Amanda) of Sarasota, FL, and Jared of Sarasota, FL; Julie (Kley) Cardona of San Jose, CA, and their daughter Grace, also of San Jose, CA. He was preceded in death by his parents, John and Susie, sister Wilma Stam, brother Elmer, and son-in-law Steve Hoogeveen. Funeral Services for Tunis will take place at 10:00 a.m., Monday, January 17, 2022, at the Bethel Christian Reformed Church, with Pastor Alvern Boetsma officiating. A family prayer service will take place at 9:45 a.m. in the church fellowship hall. Visitation will begin at 10:00 a.m., Sunday, January 16, 2022, at Langkamp Funeral Chapel and Crematory. The family will be present from 2 – 4 p.m. at the funeral chapel to greet visitors. Burial will be in the Forest Cemetery in Oskaloosa. Memorials can be made to the Oskaloosa Christian School.

Tunis Kelderman, 93, of Oskaloosa, passed away Wednesday, January 12, 2022, at the Crystal Heights Care Center in Oskaloosa, IA. Tunis Elmer Kelderman, son of John and Susie (Menninga) Kelderman, was born February 23, 1928, in the home of his... View Obituary & Service Information

The family of Tunis Elmer Kelderman created this Life Tributes page to make it easy to share your memories.