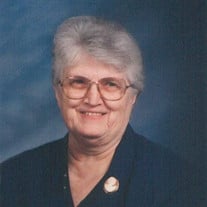 Velma DeWitt, 84, of Oskaloosa passed away Wednesday, October 3, 2018, at Northern Mahaska Specialty Care in Oskaloosa Velma Jean DeWitt, daughter of Murrel and Geneva (Gable) Christophel, was born January 14, 1934, in Oskaloosa, Iowa. She was a life-long resident of Oskaloosa where she attended Jefferson School and Oskaloosa High School. She married the love-of-her-life, Cleo Franklin DeWitt, January 24, 1952, at the First Church of the Nazarene. In addition to raising five children, Velma worked as a clerk at numerous retail business including Kresge, Jupiter, Woolworth, K-mart, and Hy-Vee. Velma enjoyed her work and the many co-workers and customers who became her friends. She was a member of the Eagles Ladies Auxiliary for over 59 years. In her spare time, Velma also enjoyed bowling, embroidery and working in her flower gardens. Her family includes her children: Gary (Myrna) DeWitt of Virginia Beach, VA, Dennis DeWitt of Oskaloosa, and Bonnie (Raymond) Richards of Oskaloosa; six grandchildren: Scott (Shari) DeWitt, Jim (Joyce) DeWitt, Brandi (Curt) Allen, Todd (Mandi) Richards, Cynthia (Aaron) Molyneux, and Cristina Fernandez; 14 great-grandchildren; four great-great-grandchildren; a sister, Marilyn Whitter of Pella, a brother, Buck (Karen) Christophel of Oskaloosa; and several nieces and nephews. In addition to her parents she was preceded in death by her husband, Cleo, who passed away just 19 days before Velma; stepmother, Gail Harper; two daughters: Cindy DeWitt and Tammy Hootman; one great-grandchild, Taylor Allen; a brother: George Christophel. Funeral Services for Velma will be held at 10 a.m., Wednesday, October 10, 2018, at Langkamp Funeral Chapel & Crematory with Pastor Alvern Boetsma of the Good News Chapel officiating. Burial will be in Forest Cemetery. Visitation will begin after noon on Tuesday; the family will greet visitors from 5-8 p.m. Tuesday evening at the funeral chapel. Memorials can be made to the MHP Hospice Serenity House. Condolences and memories can be sent to the family by visiting langkampfuneralchapel.com.

The family of Velma Jean DeWitt created this Life Tributes page to make it easy to share your memories.

Send flowers to the DeWitt family.