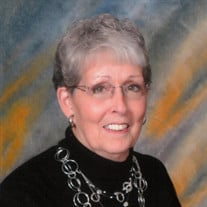 Verna Bolibaugh, 82, of Oskaloosa, passed away Tuesday, April 13, 2021, at the Mahaska Health Hospice Serenity House in Oskaloosa. Verna Jean Bolibaugh, daughter of Hiram and Fern Eva (Lockard) Walker, was born September 30, 1938, in Montezuma, Iowa. The family moved to Oskaloosa when Verna was 15 years old. After graduation from Oskaloosa High School in 1956, Verna attended the Ottumwa Beauty School. Verna joined Freda Taylor at Taylor's East High Beauty Shop after earning her license. In 1965, Verna purchased the shop from Freda and continued to operate it until her retirement in the mid-2000s. Verna married Donald Bolibaugh on April 28, 1963, at the First Assembly of God in Oskaloosa. Verna was a busy mother raising her children and operating her shop, but she also found time to enjoy reading, gardening and her flowers. Her family and grandchildren, in particular, were so precious to her, and she tried never to miss any of the events in which they participated. In her later years, Verna enjoyed walking and coffee with her friends. Decorating graves of relatives and friends was one of her long-time traditions; it was one way she showed her love and respect for those individuals. Verna was a beautician for almost 50 years; she got to know many of her customers and they became her friends. As a way to honor them and give them one last gift, she gladly did their hair before their funerals. Verna attended the Gateway Church of the Nazarene. Verna's family includes her children: Rebecca (Jeff) Leu of Ottumwa, Wade Bolibaugh of Oskaloosa, and Grant Bolibaugh, also of Oskaloosa; five grandchildren: Ethan and Blake Leu, and Veronica, Waylon, and Vivian Bolibaugh; two sisters, Nora Reece of Cedar Rapids, and Esther Richards of Perry; a brother, Dean (Joyce) Walker of Hiawatha; several nieces and nephews and great-nieces and nephews; and her husband's sister, Alice (John) DeRooi of Grinnell, and sister-in-law, Marie Bolibaugh of Eddyville. In addition to her parents and her husband, Don, in 2012, Verna was preceded in death by infant twins; two brothers, Venzel Lockard and Melvin "Bud" Walker Sr.; and two sisters, Grace Mason and Oma Leopard. Verna's funeral services will be held at 11 a.m., Monday, April 19, 2021, at Langkamp Funeral Chapel, with Pastor David Pinkerton and Pastor Darren Melton officiating. Coffee and refreshments will be served before the service from 10 a.m. to service time. Burial will be in Barnes City Cemetery. Visitation will begin at 11 a.m., Sunday; the family will greet visitors from 2-4 p.m., Sunday afternoon. Memorial contributions can be made to Relay of Life to benefit the American Cancer Society. According to the rules put in place by the Iowa Department of Public Health, proper social distancing and appropriate personal protective equipment are advised for attending these public events. The service will be available to view on the Langkamp Funeral Chapel’s YouTube channel Monday afternoon for those unable to attend the ceremony.

The family of Verna Bolibaugh created this Life Tributes page to make it easy to share your memories.

Send flowers to the Bolibaugh family.