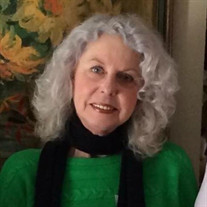 Virginia Paulson, 76, of University Park, died February 17, 2021, at the Mahaska Health Hospice Serenity House in Oskaloosa. Virginia loved life so much and had battled and come back from many health issues through the years. She was an amazing, strong, and selfless woman who always thought of others before thinking of her own needs. She loved to cook and could make a meal out of anything; her Christmas cookies were legendary. She loved to read westerns, the smell of lavender, and going for drives over by Harvey, where she grew up on the farm and spent time with her Grandma and Grandpa Wilson. These times, she would recount, were the happiest years of her life. She also loved her family fiercely, and her cats were the most spoiled! She had been known to take in many strays over the years, giving them a warm home inside or a heated house on the porch. She loved her big screen TV where she and her best friend, Brent, watched “The Price is Right,” “Jeopardy,” and “The Wheel of Fortune.” She enjoyed MSNBC and was always up on what was happening in the world. Virginia was born November 22, 1944, at Mahaska Hospital, the daughter of Orville and Alice (Wilson) Malloy. The family lived in Kirkville for a time and then moved to Harvey, where she grew up and got into a lot of mischief with her sister Nancy! The family later moved to Cincinnati, Iowa, where she met Ron Hudson. They married in 1961 and had two children, Veronica and Larry. Virginia and Ron later divorced, and Virginia and the kids moved to Oskaloosa to be near her family. In 1977, Virginia graduated from Indian Hill School of Nursing at the top of her class, something she had always wanted to achieve. Nursing was her true calling; she was a true advocate for her patients and loved her profession. She worked at Mahaska County Hospital on old Second Floor after graduation and finally at the VA Hospital in Knoxville. She left quite a legacy, which will be remembered by her former patients and all who loved her. Those left to cherish her memory at her children: Veronica (Sonny) Montgomery and Larry Hudson, both of Oskaloosa; a step-son, Tommy Paulson of Des Moines; grandchildren: B.J. Hudson of Oskaloosa, Jake (Katie) Montgomery of Oskaloosa, Ben Montgomery of Chicago, IL, Chaley Schultz (Ryan Gravett) of Urbandale who was influenced greatly to go into nursing by her grandma; great-grandchildren: Aubrey and Dane Schultz and Payten and Tory Gravett of Urbandale, and Aleigha and Jackson Burton of Oskaloosa. She is also survived by a sister, Nancy (Clyde) Doty of Oskaloosa; her ex-husband, Steve Paulson; her best friend Brent Dodge of University Park, who will miss her greatly; also nieces and nephews and many close lifelong friends; and her cats, Ceaser and Mona. Virginia was preceded in death by her parents and two granddaughters: Jessica and Bailey Hudson. As was her wish, Virginia’s body has been cremated. Memorial services will be held at 10:30 a.m., Monday, February 22, 2021, at Langkamp Funeral Chapel & Crematory, with Father Troy Richmond of St. Mary’s Catholic Church officiating. The family will greet visitors from 9:30 to service time on Monday. According to the rules put in place by the Iowa Department of Public Health, proper social distancing and appropriate personal protective equipment are advised for attending this public event. The service will be available to view on the Langkamp Funeral Chapel’s YouTube channel Monday afternoon for those unable to attend the ceremony. Virginia was adamant about her wishes that part of her ashes be spread on the farm, which will be honored in the spring by her family and friends in a private gathering. Her urn will then be interred in Eureka Cemetery near Harvey in a private gathering, also in the spring. She will then be home again. Memorial contributions can be made to the Mahaska Health Foundation for the Serenity House or Stephen Memorial Animal Shelter.

Virginia Paulson, 76, of University Park, died February 17, 2021, at the Mahaska Health Hospice Serenity House in Oskaloosa. Virginia loved life so much and had battled and come back from many health issues through the years. She was an amazing,... View Obituary & Service Information

The family of Virginia A. Paulson created this Life Tributes page to make it easy to share your memories.

Send flowers to the Paulson family.