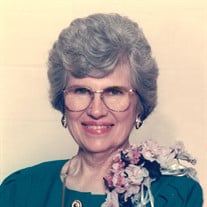 Virginia Scott, 86, of Oskaloosa, passed away Saturday afternoon, September 14, 2019, at the Oskaloosa Care Center. Virginia Ann Scott, daughter of Harry and Veda (Williamson) West, was born November 28, 1932, in Minburn, Iowa. After graduating from Minburn High School in 1950, she moved with friends to Des Moines where she worked for Banker’s Life, what is now known as Principal Financial Group. Her roommate, Pearl, was from Oskaloosa and while at a dance she was introduced to her future husband, Oren Scott. They married June 12, 1955, at the Minburn Methodist Church. They began their life together living with Oren’s parents on the family farm in Jefferson Township. After a few months, Virginia and Oren built a home of their own, a 16-foot by 24-foot structure on skids, allowing them the option to move it as necessary. As life unfolded, they never did move that first little home but added several additions to accommodate their growing family. Virginia was her husband’s true partner in the farming operations: she helped him chore until her sons were capable; she worked alongside her mother-in-law, raising large gardens and preserving its bounty. Virginia loved to sew, creating her and her daughter's clothing for many years. Virginia also enjoyed cooking and baking and filling her house with family and friends. She was a member of the Jefferson Happy Helpers women’s club, meeting with friends monthly to share food and friendship. In her 60’s, Virginia started a new career; she began working at Wal-Mart in the women’s clothing department. She took much pride in her area, making sure the dressing rooms and displays were in order. Virginia loved interacting with people, and her job gave her a perfect setting for her to do just that. She was a member of the Central United Methodist Church. Her faith was the foundation of her life, and passing that faith on to her children was an everyday event, taught through word and deed. Her family includes her children and their spouses: Kenneth and Tammy Scott of Oskaloosa, Raymond and Judy Scott of Marion, Iowa, Barbara and Alan De Bruin of Oskaloosa, and Gregory and Colette Scott of Oskaloosa. She was blessed with ten grandchildren: Justin Scott, Brandon (Vicky) Scott, Aron (Danielle) Scott, Amber Scott, Allison Scott, Chelsey (Aaron) Colbert, Brett (Amber) De Bruin, Adam (Samantha) De Bruin, Nick (Taylor) Scott and Heather (Brad) Swank; and nine great-grandchildren: Karlyn, Gabriel, Joey, and Benaiah Scott, Willow and Sage Scott, Bentley Swank, Brakken DeBruin, Brynlee De Bruin, and #10 anticipated soon. In addition to her parents, she was preceded in death by her husband, Oren on October 20, 2011, and an infant brother. Funeral services for Virginia will be held at 10:30 a.m., Wednesday, September 18, 2019, at the Central United Methodist Church with Rev. Bruce Wittern officiating. A family prayer service will be held at 10:15 a.m., in Kent Chapel before the funeral. Burial will be in Coal Creek Cemetery. Visitation will begin after 11 a.m. Tuesday, at Langkamp Funeral Chapel; the family will greet visitors from 4-7 p.m. Memorial contributions can be made to the Central United Methodist Church.

The family of Virginia Ann Scott created this Life Tributes page to make it easy to share your memories.

Send flowers to the Scott family.