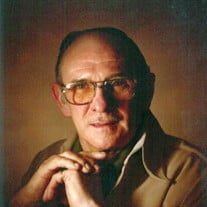 Joe Smith, 94, of Oskaloosa and formerly of Beacon, passed away Sunday afternoon, March 18, 2018, at the Oskaloosa Care Center. Walter Joe Smith, son of James Walter and Merle Amy (Chiles) Smith, was born October 15, 1923, in Des Moines, Iowa. He attended Des Moines schools, and his first job was with Firestone Tire Company. He met a young Oskaloosa gal, Nellie “Naydene” Perkins, who was attending high school in Des Moines. They married October 15, 1944, at the rural home of her parents, near Beacon, Iowa. They remained in Des Moines until after their first son was born, and then moved to Beacon to be closer to Naydene’s family. Joe was employed by Lytle Motors and later at Thayer Chevrolet as a mechanic. After an attempt to unionize employees failed, Joe went to work for Clow Valve August 15, 1955. Joe worked at Clow for 31 years, first in the machine shop and later in maintenance; he retired April 1, 1986. Joe had many enjoyable years of retirement. He and Naydene owned a 5th wheel, and they spent many months of each year at Branson, Missouri and exploring much of the country. Joe also spent many hours in his woodworking shop, crafting gifts for grandchildren and others. Joe attended the First Baptist Church in Oskaloosa and later the Beacon United Methodist Church. His family includes his children and their spouses: Joe and Nancy Smith, Ted and Linda Smith and Cynthia and Ron Barrett, all of Beacon; grandchildren: Jodi Smith of Washington State, Alicia Smith of Beacon, Melissa (Mark) Little of Oskaloosa, Justin (Heather) Smith of Beacon, Brandon (Wendi) Smith of New Sharon, and Eric (Michaela) Barrett of Leighton; great-grandchildren: Mark and Jeremy Jacobs, Katelyn and Jared Smith, Hayley Pinkerton, Nash Smith, Rayalin Russell, Morgan and Hali Barrett, MaKennah and Spencer Little; and great-great-grandson, Charlie Walter Jacobs. In addition to his parents, Joe was preceded in death by his wife of 70 years, Naydene; a grandson, Douglas Joe Smith; a brother, Elza Smith; and three sisters: Opal Meyers, Mary Ann Gamble, and Evelyn Pritchard. Funeral Services for Joe will be held at 10:30 a.m., Thursday, March 22, 2018, at Langkamp Funeral Chapel with Pastor Kevin Smith officiating. Burial will be in Beacon Cemetery. Visitation will begin at noon, Wednesday at the funeral chapel; the family will greet visitors from 5-7 p.m. Memorials can be made to the University of Iowa Stead Family Children’s Hospital.

The family of Walter Joe Smith created this Life Tributes page to make it easy to share your memories.

Joe Smith, 94, of Oskaloosa and formerly of Beacon, passed away...

Send flowers to the Smith family.