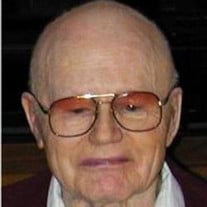 Walter Van Donselaar: Walter passed away Wednesday afternoon, February 2, 2005 at the Wesley Acres Care Center in Des Moines, IA at the age of 89 years, 8 months and 25 days. Walt served in the Army from 1943 to 1946, including duty in Europe. Upon his return, he worked as a bookkeeper and as office manager for the Oskaloosa Water Department for 29 years. He and Marty had three children. Thomas was born in 1947 with multiple disabilities and lived for 11 years. Daughter Linda was born in 1948 and son Lee in 1950. Walt was born in Sully, IA to parents Walter and Marie Kuiters Van Donselaar, both first generation immigrants from the Netherlands. Walt and his two sisters, Wilma and Cora, started their first day of school in a one-room schoolhouse speaking no English. When Walt was about ten, his family moved to Lacy, IA. After graduation from Lacy High School in 1933, he attended William Penn College in Oskaloosa from 1935-39, where he earned a BA degree in Commerce and Economics. He taught school in Oxford and Fonda, where he met his future wife, Martha Thomas of Dedham, IA. She was a home economics teacher and he slyly asked her to sew on a button for him. They were married in May of 1943. Walt enjoyed good times with family and friends. He and Marty attended school and sporting events over the years, cheering on their kids, and played cards and Scrabble with friends. They were active members of the Methodist Church in Oskaloosa. The family took summer car trips to a number of states, with Walt at the wheel. He enjoyed tinkering with cars and was mad when the doctor told him he had to quit driving a few years ago. He liked to putter around, taking care of things. He was a role model for preventive maintenance. PDF Printable Version

Walter Van Donselaar: Walter passed away Wednesday afternoon, February 2, 2005 at the Wesley Acres Care Center in Des Moines, IA at the age of 89 years, 8 months and 25 days. Walt served in the Army from 1943 to 1946, including duty in Europe.... View Obituary & Service Information

The family of Walter Van Donselaar created this Life Tributes page to make it easy to share your memories.