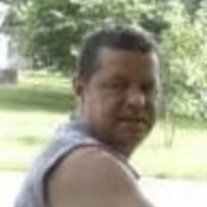 Wilber Glasgow, 62, of Oskaloosa died Monday evening, September 7, 2020, in a motorcycle/deer accident west on Oskaloosa on Highway 92. Wilber J. Glasgow, son of Wilber Glasgow Sr. and Darlene (Bishop) Glasgow, was born on August 15, 1958, in Ottumwa, Iowa. Wilbur attended Ottumwa High School. On March 19, 1976, he was united in marriage to Sandra Kay Chrisman at the home of his parents in Ottumwa. Wilber worked at Clow Valve Company for several years and then for Dugger Construction Company. He was last employed at the Comfort Inn in Oskaloosa in maintenance. Wilber was a member of the ABATE Motorcycle Club and the V.F.W. He enjoyed the great outdoors, gardening, hunting, fishing, and riding his motorcycle. His family includes his wife, Sandy of Oskaloosa; two sons: Jason (Lori) Glasgow of Oskaloosa and Cody (Tyler) Glasgow of Windsor, CO; two grandchildren: Gracie and Joe Glasgow; five siblings: Jerry (Judy Weller) Glasgow, Rick (Nancy) Glasgow, Connie (Scott) Hazelwood, Sharon (David) Garrett, and Brenda (Terry) Feehan, all of Ottumwa; several nieces and nephews; and two fur babies, Keeper and Nini. Wilber was preceded in death by his parents. As was his wish, Wilber’s body will be cremated. A memorial service will be held at a later date. Memorial contributions can be made to his family and will be designated later. Langkamp Funeral Chapel and Crematory have been entrusted with his arrangements.

The family of Wilber Glasgow created this Life Tributes page to make it easy to share your memories.

Send flowers to the Glasgow family.