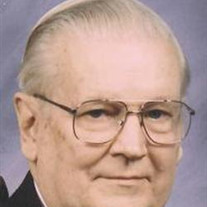 Willard Edgar Andrews: Willard passed away early Sunday morning, Jan. 30, 2005 at the Trinity Nursing and Rehab Center in Merriam, KS. He was 82 years, 9 months and 29 days of age. Willard was a member of the First Church of the Nazarene in Oskaloosa where he served on the church board, was a youth and mission leader, led the Sunday morning prayer service, taught a Sunday School class for over 50 years and served as a Trustee for 7 years for Mid-America Nazarene University in Olathe, KS. For the past 3 years, Willard has made new friends and enjoyed worshipping with the congregation at Shawnee Church of the Nazarene, Shawnee, KS. Willard was an avid Iowa Hawkeye football and basketball fan and also a Chicago Cubs fan. He played city softball league and enjoyed taking fishing trips to Minnesota. Willard Edgar Andrews, son of Carl Edgar & Mary Luella Stutzman Andrews was born April 1, 1922 in New Sharon, IA. He was a 1939 graduate of Lacey High School and then worked for the County Engineer until 1942. He served in the U.S. Army with the rank of Staff sergeant as a radar technician from 1942 to 1946, during WWII. On Oct. 12, 1943 he married Marjorie Hahn at the First Church of the Nazarene in Oskaloosa. After his military service, he worked for Greeve Floral as a floral designer for 12 years and worked as a salesman for Rena-Ware for 3 years. He was then employed by Indiana Glass Company as a sales representative to Florists in Iowa, Missouri and Illinois. During this time, he developed Willard's Wholesale and sold glass, pottery and baskets to florists from 1967 to 1992. He retired at the age of 70 in 1992 and in Oct. 2002 he and Marjorie moved to Shawnee, KS. Willard is survived by his wife, Marjorie of Shawnee, KS; two daughters and spouses, Judy & Bill Van Houweling of Rose Hill, IA and Barbara and Rev. Don Messer of Shawnee, KS; a grandson, Scott Messer of Shawnee, KS; a granddaughter and spouse, Kathy and Brad Helley of Northridge, CA and a sister-in-law, Joyce Andrews of Clearwater, FL. Willard was preceded in death by his parents, his brother, Harold Andrews and one granddaughter, Kristina Messer. Willard will be missed by a host of loved ones and friends. PDF Printable Version

Willard Edgar Andrews: Willard passed away early Sunday morning, Jan. 30, 2005 at the Trinity Nursing and Rehab Center in Merriam, KS. He was 82 years, 9 months and 29 days of age. Willard was a member of the First Church of the Nazarene in... View Obituary & Service Information

The family of Willard Edgar Andrews created this Life Tributes page to make it easy to share your memories.

Send flowers to the Andrews family.