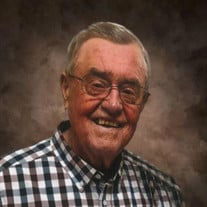 Willis Veldhuizen, 87, of Oskaloosa, passed away Friday, June 10, 2022, at the Mahaska Health Hospice Serenity House in Oskaloosa. Willis Lee Veldhuizen, son of William D. and Henrietta (Plette) Veldhuizen, was born September 11, 1934, in Eddyville, Iowa. He was raised on a farm near Cedar and was a 1952 graduate of Cedar High School. His first job was with the Oskaloosa Brick factory. He worked there two years and then joined his father and brother, Carl, in the family farming operation. July 17, 1954, he married Nancy Vivian Plowman in Oskaloosa. It was this same year that he and his brother, each purchased one half of their parents’ farm. They made their home on the farm and Nancy still resides there. Willis was instrumental in establishing the Bible Truth Chapel, which later became Hillside Bible Church. In their later years, he and Nancy attended the Calvary Bible Church. He loved buying cattle and attending livestock auctions and passed his love of animals on to his grandchildren. He was an avid gardener and enjoyed his Oliver tractors. He was also a sports fan and attended many Wm. Penn University and Oskaloosa High School events and rarely missed a Chicago Cubs broadcast. Willis’ family includes his wife, Nancy; his daughter, Karen and Curt Smith of Cedar Falls; his son, Billy and DeeDee Veldhuizen of Oskaloosa; his grandchildren: Jordan (Carrie) Smith of Waukee, Josiah (Annie) Smith of Cedar Falls, Jonathan (Laurilee) Smith of Anchorage, AK, Amanda Veldhuizen of Oskaloosa, Bret (Stephanie) Hoover, Emily (Nick) Thomas, and Lindsey Veldhuizen of Oskaloosa; eight great-grandchildren; a sister, Gladys Vande Krol of Waterloo. In addition to his parents, Willis was preceded in death by two infant sons, Benjamin James and Timothy Dean, and his brother, Carl. Funeral services for Willis will be held Friday, June 17, 2022, at 10:30 a.m., at Calvary Bible Church with Rev. Doug Smiley officiating. Interment will be in Bloomfield Cemetery in Mahaska County. Visitation will be held from 11 a.m. to 7 p.m., Thursday, at Langkamp Funeral Chapel. Memorials made to Mahaska Health Foundation for the Serenity Hospice House or can be made to the family and they will direct to “Voice of the Martyrs.”

The family of Willis Veldhuizen created this Life Tributes page to make it easy to share your memories.