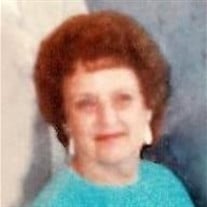 Wilma Hudson, 97, of Oskaloosa passed away Thursday, December 27, 2018, at Northern Mahaska Specialty Care in Oskaloosa. Wilma Eileen Hudson, daughter of Albert and Agnes Gertrude (Warnock) Molyneux, was born January 7, 1921, at the rural home of her parents in Monroe Township, Mahaska County, Iowa. Wilma grew up in the What Cheer area and after graduating from What Cheer High School in 1938, she attended Capital City Commercial College, now AIB in Des Moines. After earning her degree in accounting, Wilma worked for Flynn Dairy in Des Moines. In the mid 1940’s, she and a girlfriend traveled to California to seek employment. Wilma initially was employed by Weber Show Case in Los Angeles. It was there that she met her husband, Jack Hudson. They were married, September 13, 1947, in Pasadena, CA. Due to their employer’s policy of not employing married couples, Wilma took a job in accounts payable with Von’s/Safeway Grocery Store. Wilma enjoyed a long and satisfying career with Safeway, remaining there until her retirement in 1990. Sadly, her husband Jack passed away, August 1, 1991. Wilma remained at their home in Whittier, California until 2006, when she moved to Oskaloosa to be closer to her family. Wilma’s family includes her brother, Donald (LaVerne) Molyneux of Thiensville, WI; a sister-in-law, Icel Molyneux of Oskaloosa; a brother-in-law, Milo Leurs of Washington, IA and several nieces and nephews. In addition to her parents and her husband, Wilma was preceded in death by a sister, Betty Leurs; three brothers: Cleo, Kenneth, and Marvin Molyneux; and two sisters-in-law, Louise (Holub) Molyneux Boender and Betty (Augustine) Molyneux. Funeral and burial arrangements are pending at the Riverside National Cemetery in Riverside, California. Langkamp Funeral Chapel & Crematory is handling the local arrangements. Memorials can be made to the Mahaska Health Hospice Serenity House.

The family of Wilma Eileen Hudson created this Life Tributes page to make it easy to share your memories.

Send flowers to the Hudson family.