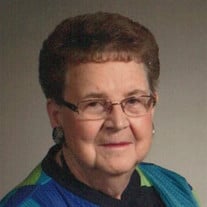 Wilma Ver Steegh, 89 of Pella and formerly of Oskaloosa passed away Friday, April 27, 2018, at the Cottages in Pella, Iowa. Wilma Irene Ver Steegh, daughter of Arie and Patrina (Boender) Vander Linden, was born April 17, 1929, in New Sharon, Iowa. She married Richard John Terpstra, September 20, 1946, at the Central Reformed Church in Oskaloosa. They made their home on a farm near New Sharon, and Wilma stayed very busy as a homemaker, mother of four children and farmer’s wife. Richard passed away after 37 years of marriage, July 15, 1984. Wilma was blessed to find love a second time, she married Raymond Ver Steegh, January 4, 1992, and they made their home in Oskaloosa. He passed away, March 17, 2014. Wilma was a member of Central Reformed Church since age 18. Wilma’s hobbies included sewing and quilting. In her younger years she sewed many clothing items for her family, and as she got older, she continued to bless family and friends with many beautiful quilts and items made from quilted fabric. Wilma used her talents generously, providing a baptismal quilt to each child at her church for many many years. She also served in the Helping Hands Club and on the worship and decorating committees at church: creating pulpit drapes and gifts for the congregation on special occasions. Wilma’s family includes her children and their spouses: Sandra and Ron Miller of Cedar Rapids, Rick and Diane Terpstra of Pella, Randy Terpstra and Jolynn Wishmeyer of Cedar Falls and Doug and Bev Terpstra of Pella; her step-children and their spouses: Keith & Debbie Ver Steegh of Des Moines, Barbara & Randy Sterling of Rose Hill and Evelyn Ver Steegh of Des Moines; her nine grandchildren: Holly Miller (Chris Karr) of Chicago, IL, Bridgette (Brent) Hardesty of Pella, Jennifer (Justin) Parker of Grimes, Brad (Deanna) Terpstra of Pella, Tyler Terpstra of Ankeny, Matthew Terpstra of Chicago, IL, Tara (Dusty) McClain of Heath, Ohio, Nick Terpstra of Cedar Falls and Linden Terpstra of Charlotte, NC; ten great-grandchildren; and her sisters: Hazel Klein of Oskaloosa, Mildred Wenger of Columbia, MO, and Lena Patterson of Oskaloosa. In addition to both of her husbands, Wilma was preceded in death by her parents and her sisters: Pauline Spain, Betty Springer, Catherine De Booy, Bernice Bais and three infant sisters. Funeral Services for Wilma will be held at 10:30 a.m., Tuesday, May 1, 2018, at Central Reformed Church in Oskaloosa with Rev. Jon Nelson officiating. A family prayer service will be held at 10:15 a.m. before the service, in the east lounge of the church. Burial will be in Forest Cemetery. Visitation will begin at 10 a.m., Monday, at Langkamp Funeral Chapel; the family will greet visitors from 5-7 p.m., Monday evening. Memorial contributions can be made to the Central Reformed Church.

The family of Wilma Irene Ver Steegh created this Life Tributes page to make it easy to share your memories.

Wilma Ver Steegh, 89 of Pella and formerly of Oskaloosa passed...