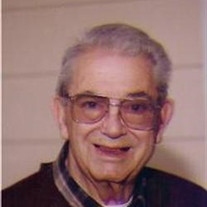 Wilmer Gordon Harvey: Wilmer passed away at the Spring Creek Rehabilitation Center in Fort Collins, CO at the age of 74 years, 9 months and 17 days. Wilmer is survived by three sons and daughters-in-law: Edwin G. and Terri Harvey of Chesterfield, MO; David G. and Teri Harvey of Blairstown, NJ; and Michael R. and Laurie Harvey of Fort Collins, CO; a brother: Eldon (Joyce) Harvey of Dodge City, KS and a brother-in-law, Lawrence (Hazel) Brown of Batavia, IA. He was blessed with 7 grandchildren: Sarah (Rob) Tilley, Jeffrey, Katie, Stephen, Michaela, Lindsey, Christopher and Danny Harvey. Wilmer Gordon Harvey, son of Clarence Wilmer & Myrna Campbell Harvey was born December 22, 1929 in Kansas City, Kansas. He was a 1948 graduate of Wyandotte High School and in 1954; he received his B.A. in Education from Kansas State Teaching College in Emporia, KS. In 1973, he received a master's degree in Education from Northeast Missouri State University. Wilmer served in the United States Army from 1951 to 1953. On July 26, 1957, he and Linnie Brown were united in marriage in Oskaloosa, IA. A job with the Oskaloosa School system brought Wilmer & Linnie to Oskaloosa in 1964; after 28 years of teaching primarily 6th grade at Garfield Elementary School, Wilmer retired in 1992. Wilmer coached 5th and 6th grade basketball for 25 years in addition to his teaching responsibilities. He was a member of the Oskaloosa Education Association and the Iowa State Teachers Association. He was also a member, elder and Sunday school superintendent at the First Presbyterian Church, the YMCA's Y's Men's Club, and the Kiwanis Club. Following his retirement he enjoyed traveling and volunteering; he also enjoyed crossword puzzles, reading and watching all kinds of sports. Wilmer relocated to Fort Collins in 2001 and had spent the last several months in the rehabilitation center. He was preceded in death by his parents, his wife, Linnie on August 10, 1998; and a son, Steven Harvey. PDF Printable Version

Wilmer Gordon Harvey: Wilmer passed away at the Spring Creek Rehabilitation Center in Fort Collins, CO at the age of 74 years, 9 months and 17 days. Wilmer is survived by three sons and daughters-in-law: Edwin G. and Terri Harvey of Chesterfield,... View Obituary & Service Information

The family of Wilmer Gordon Harvey created this Life Tributes page to make it easy to share your memories.

Wilmer Gordon Harvey: Wilmer passed away at the Spring Creek...

Send flowers to the Harvey family.