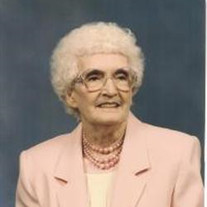 Zula Florence Ferguson: Zula passed away early Sunday morning, May 1, 2005, at the Montgomery County Memorial Hospital in Red Oak, IA, at the age of 93 years, 6 months and 13 days. Zula is survived by her children: Rev. Duane (Rose Marie) Ferguson of Monticello, IA; Carolyn Peters of Des Moines, IA and Mary Hughes of Red Oak, IA; 18 grandchildren and 34 great grandchildren; her brother, Herbert Tally of Clarinda, IA; and a sister, Juanita Williams of Omaha, NE. Zula Florence Ferguson, daughter of William D. & Mary Hamilton Tally, was born Oct. 18, 1911 in Clinton, MO. She was a 1929 graduate of Clinton High School and then attended Goshen Indiana College, where she received a teaching certificate after 2 years. She married Dewey Earl Ferguson on March 19, 1932 in Clinton, MO. He passed away Dec. 9, 1990. She taught for the Nishna Botna Valley School District in Hastings, IA for 25 years, retiring in 1973. She and Dewey moved to Oskaloosa in 1980. She belonged to the First Church of the Nazarene, where she enjoyed church activities. She also enjoyed crafts and spending time with her family. She was preceded in death by her husband; a son, Jack Ferguson in 1982; and a sister, Marjory Little. PDF Printable Version

The family of Zula Florence Ferguson created this Life Tributes page to make it easy to share your memories.

Send flowers to the Ferguson family.